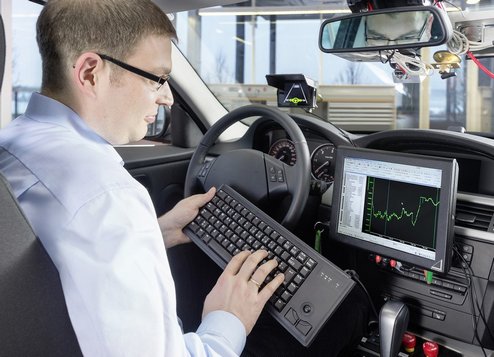 High-performance assistance systems already help drivers reach their destinations safely and more comfortably. Such systems control speed and the distance between vehicles. They also warn drivers of traffic jams and help them maneuver into even the tightest of parking spaces. Bosch, the global supplier of automotive technology and services, is set to expand its range of driver assistance systems in the years to come. In the future, these systems will take on a growing role in guiding vehicles through traffic jams. More specifically, they will brake, accelerate, and steer completely autonomously. The traffic jam assistant will step in when the vehicle is moving at speeds between 0 and 50 kilometers per hour. This means that it will operate in most stop-and-go traffic situations. According to the German motor club ADAC, the total length of tailbacks in Germany alone amounted to 405,000 kilometers in 2011. “The traffic jam assistant helps drivers arrive more relaxed at their destination, even in dense traffic,” says Gerhard Steiger, president of the Bosch Chassis Systems Control division. The first generation of the traffic jam assistant is expected to enter series production in 2014. In the following years, the feature will be enhanced to cover ever-faster speeds and more complex driving situations. Eventually, the traffic jam assistant will serve as a highway pilot, making fully autonomous driving a reality.

Today, adaptive cruise control already tracks the vehicles ahead and adapts the distance and speed of the driver’s own vehicle accordingly. Acting in combination with the ESP® system and with the additional support of lane-detection cameras and electromechanical steering, this forms the technical basis for autonomous driving. High-performance software now calculates the appropriate driving instructions for a safer and less stressful driving. Automatic lane changing is the next functional step. It calls for two additional features. First, a rear-mounted radar sensor that also detects fast-approaching vehicles and, second, a dynamic navigation map. Such maps, which operate via a mobile network connection, can keep drivers informed of current roadwork sites and local speed restrictions. And although drivers remain responsible for driving, they can limit themselves to monitoring the actions of the driver assistance system.

The Bosch portfolio offers all the required sensors and components As well as the ESP® and electrical steering, Bosch offers all the sensors required to detect the full range of traffic conditions relevant for drivers and their vehicles. Depending on the extent of onboard functions offered by a particular vehicle, front detection is carried out by a radar sensor combined with a mono camera, or by a stereo camera. With the LRR3, Bosch offers a high-performance long-range radar sensor. With an aperture angle of up to 30 degrees, this sensor can detect objects at a distance of 250 meters. The new mid-range radar sensor, scheduled to go into series production in 2013, offers a range of 160 meters and an aperture angle of 45 degrees. Its cost is significantly lower, since it is designed to meet the requirements of the mass market. In addition to the currently available multi-purpose video camera that is equipped with one sensor element, Bosch has developed a stereo video camera that detects objects in 3D with the help of two sensors. As a result, it is able to calculate exactly how far objects are from the vehicle, as well as in which direction they are moving. Both sensor configurations enable full predictive emergency braking. Two adapted mid-range radar sensors assume the task of observing traffic behind the vehicle. These sensors have an aperture angle of 150 degrees and can detect objects up to 100 meters away. Finally, the parking assistant’s ultrasound sensors provide support during close-range steering maneuvers.

Level of automation continues to grow
“Fully autonomous driving will come about one step at a time,” Steiger says. At first, driving on highways with an ever greater degree of automation and at ever higher speeds will be possible, until the highway pilot can take over the entire trip. Two major challenges remain. First, inner-city driving, since automated vehicle functions have to deal with dense traffic involving a large number of road users traveling in every direction. Second, developing a concept to ensure that the system’s functions operate reliably in all types of driving situation.