“There is a water crisis today. But the crisis is not about having too little water to satisfy our needs. It is a crisis of managing water so badly that billions of people – and the environment – suffer badly,” the World Water Council’s Vision Report states.

According to the World Water Council, 1.1 billion people worldwide live without clean drinking water, while 2.6 billion people lack adequate sanitation. Developed countries account for the majority of water usage. In residential areas, for instance, North America and Japan account for daily per capita use of water of around 350 litres, while Europe accounts for 200 litres.

The global automotive industry is a major consumer of water for various production processes. According to some estimates, producing a car uses over 39,000 gallons of water, and whether tyre production is included varies by estimate.

In addition to the use of water for these processes, there is the matter of wastewater, which then needs to be treated to high standards in order to meet environmental regulations.

According to the US EPA, the true cost of using water is often misunderstood in industry, resulting in poor management choices regarding how water is used.

The common perception is that water is cheap and this leads to liberal use of water, making conservation measures difficult to justify. In fact, the cost of using water within various processes could be more expensive than originally perceived.

Rising water levels in the UK

In its 2014 Automotive Sustainability Report, the UK’s Society of Motor Manufacturers and Traders (SMMT) said water use in automotive manufacturing rose by 5.1% in the country last year, mainly due to an increase in production. Per vehicle water use has also increase by 3.9% in the UK.

Other less positive factors led to this increase in water usage. The SMMT cites an example, which involved water leaks and issues with a water tank supplying a sprinkler system, resulting in a large tank being drained as an emergency measure.

However, improvements in painting processes, which account for the bulk of water usage in automotive manufacturing, and the creation of closed-loop systems, have significantly reduced the amount of water used per car. Production in the country’s supply chain dipped, along with water use.

Of the various automotive production processes that use water, metal finishing operations are notorious for high water consumption, but it is in the paintshop that water consumption is most significant. While the painting process itself uses considerable volumes water, for automotive coatings and paints that are water-based products, processing equipment must be cleaned regularly with water.

According to an Ernest Orlando Lawrence Berkeley National Laboratory report, a typical coating operation requires thousands of litres of water each week. Unless contaminants can be removed from this cleaning water once it has been used, all of it must be disposed of as hazardous waste.

A few years ago, the US Department of Energy, Office of Energy Efficiency & Renewable Energy Industrial Technologies Program, together with the US Council for Automotive Research, released a technology roadmap for energy reduction in automotive manufacturing. The roadmap called for an elimination or reduction of energy, water and chemical requirements in paint pre-treatment.

There are, of course, significant benefits of using water more judiciously in automotive manufacturing, such as reducing the energy used in water pumping and delivery systems. The Australian Industry Group (AIG) lists out a few, such as cost, energy consumption, wastes and carbon footprint. Indirectly, this also results in better production efficiency.

Importantly, it must be recognised that the cost of water is made up not just of the purchase price, but also the handling, heating, holding, treating and discharging. And water costs and energy costs are linked; for instance, cutting down on hot water for cleaning translates into a reduction in heating costs as well.

AIG further adds that wastewater treatment often results in the generation of prescribed wastes, the disposal of which is costly. In addition, cutting energy use has a direct impact on carbon footprint.

There are many ways a vehicle manufacturer can conserve water in manufacturing operations. These include improving energy efficiency of operations; installing flow restrictions on tap water supply line; dry sweeping all areas before hosing, and eliminating leaks, on the lower end of the cost spectrum.

At the other end of the cost spectrum, a vehicle manufacturer could reuse water from a critical rinse stage in a less critical rinse stage; treat site wastewater and recycle internally; install rain water tanks; undertake storm water harvesting; use groundwater, or use Class A recycled water, especially in boilers and cooling towers, states the AIG.

Ford is one of the OEMs that has been proactive in its water conservation efforts. Ford launched the Global Water Management Initiative in 2000. Between 2000 and 2010, the company reduced its global water use by 62% (10.5 billion gallons). In 2012, the OEM announced its intention to reduce the amount of water it uses in its global operations to produce each vehicle by 30%, by 2015, compared with the levels seen in 2009.

However, when it released its 15th annual sustainability report in June this year, Ford announced that it had achieved its goal of a 30% reduction in water usage, two years ahead of schedule. The OEM intends to further reduce its usage by 2% this year, and will then set new long-term goals.

Ceres was founded by a small group of investors in 1989, in response to the Exxon Valdez oil spill. It mobilises a network of investors, companies and public interest groups to accelerate and expand the adoption of sustainable business practices and solutions. Ceres has had a relationship with Ford for more than a decade, and advises the OEM on its sustainability reporting and strategy.

“Quite frankly, the auto industry has been a bit slow in making the shift to the 21st century water mindset. It’s true that auto companies are not big direct users of water. But up and down its value chain, you see a far bigger footprint, from raw materials such as aluminium, which requires vast amounts of water to produce, to upstream water impacts of the fuels drivers use,” says Brooke Barton, Director, Ceres Water Program.

“[Ford] realises that it not only needs to be more efficient in using water, but also needs to consider what it can do beyond its factory walls to protect fresh water for the future.”

One of Ford’s success stories with regard to water conservation efforts is its manufacturing facility in Cuautitlán, Mexico. While this region receives adequate rainfall, it does not have adequate infrastructure to recover the water and hence it is a region of water scarcity. According to the OEM, the underground water table is dropping by an average of three to four meters each year.

Between 2000 and 2013, Ford says it has cut water use per vehicle produced at this facility by nearly 58%. In addition to using its 3-Wet paint technology, chemical pre-treating of its vehicles before painting and water recycling, Ford has carried out other measures, such as replacing the asphalt and parking lots within the plant with ecological concrete, which allows rain to re-enter the ground and recharge the aquifer beneath the plant.

“Companies like Ford should set water efficiency goals that prioritise water savings where water challenges are the biggest. A gallon saved in Michigan does not have the same environmental or social impact as a gallon saved in Mumbai. It’s where a company is saving water that is the critical question,” Barton says.

Water conservation and management is becoming a top priority in manufacturing planning. OEMs and suppliers around the world are introducing or expanding methods to conserve water. Examples include:

Daimler India Commercial Vehicles: sources water from its own wells, or a local supplier, and processes this water in its own waterworks. This is then fed into the appropriate water cycle system. Waste water is channelled to an onsite sewage treatment plant, processed, filtered, and fed back into the cycle, depending on the degree of purity achieved. The system is especially important as the area in which the DICV facility is located suffers from acute water shortage. 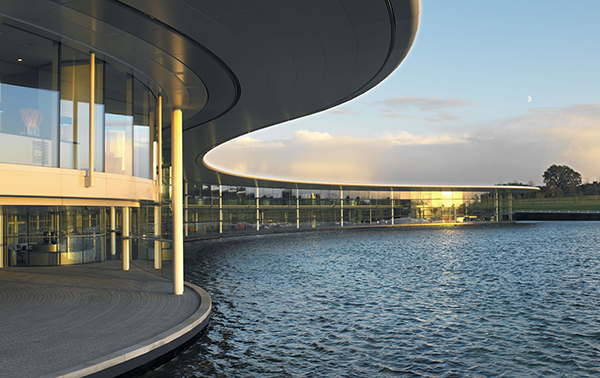 Shell: Oil and gas producer Shell is doing its part to conserve water as well and, like DICV, in an area where water is not plentiful. Shell’s Pearl GTL (gas-to-liquid) plant in Qatar produces water as a by-product of the GTL process. The water produced as a result of this is classified as industrial waste and so cannot be used for drinking. However, it can be fully reused in manufacturing. This enables the Pearl facility to avoid drawing precious drinking water from the area.