Home › News Releases › Revolutionising the automotive industry, creating future-proof jobs and introducing innovative technology: what a gigafactory could bring to the Czech Republic

Revolutionising the automotive industry, creating future-proof jobs and introducing innovative technology: what a gigafactory could bring to the Czech Republic

The Volkswagen Group is considering building one of six gigafactories in Central and Eastern Europe to produce battery cells for battery-electric vehicles (BEV).

The Volkswagen Group is considering building one of six gigafactories in Central and Eastern Europe to produce battery cells for battery-electric vehicles (BEV). With its auto industry spearheaded by ŠKODA AUTO, the Czech Republic is among the few sites to be shortlisted. Backed by the Czech government, the only location that ticks all the boxes is the Pilsen–Líně site. The proposed investment project worth CZK 120 billion represents the largest private investment in Czech history and would radically transform the automotive industry in the Czech Republic and beyond. This article highlights the details of the potential gigafactory in the Czech Republic, outlining the current situation in the country, what the Volkswagen Group is planning as well as addressing common questions.

The Czech government has unequivocally declared its support for the Volkswagen Group to build one of its six planned battery cell factories – a so-called gigafactory – in the Czech Republic.

“The automotive industry accounts for 10% of GDP and 25% of the Czech Republic’s exports, and hundreds of other companies and tens of thousands of employees are linked to car manufacturers. If we want this sector to play a significant role in the future, we need to adapt to the changes taking place in it. If the Volkswagen Group confirms the project, it will be the largest private investment in the history of the independent Czech Republic.” – Petr Fiala, Prime Minister of the Czech Republic

In cooperation with CzechInvest, Plzeň–Líně was chosen as the ideal location after a careful selection process lasting almost 18 months. The other locations discussed do not meet the Volkswagen Group’s needs in terms of size, water resources or essential transport infrastructure.

Establishing the plant in the Czech Republic would practically create a new sector of the Czech economy and give rise to the production of innovative future technologies. It would also allow for the entire battery production chain – from lithium mining, and the production of BEVs to recycling – to be localised in the Czech Republic and thus bring a key competitive advantage to Central and Eastern Europe. In turn, the project would supplement public budgets with over CZK 71 billion over the next decade. Among other areas, the gigafactory would support the manufacturing industry as well as the development of other commercial services such as insurance, transport and warehousing. Strengthening the construction and energy sectors would add further benefits.

“The gigafactory would be crucial to transforming the Czech automotive industry. It would create up to 4,000 future-proof jobs, bring highly qualified experts into the region and secure the potential to introduce training facilities, secondary school and university courses to support school graduates and the local workforce in obtaining their qualifications.” – Klaus Zellmer, ŠKODA CEO

The influx of qualified employees would boost the housing market and intensify housing construction, as well as providing fresh impetus to the development of transport and social infrastructure, raising living standards across the region. With the agreement of all stakeholders, construction of the gigafactory would commence in the third quarter of 2024, with production ramping up as early as 2027.

In collaboration with partners, the Volkswagen Group plans to be operating six battery cell factories with a total volume of 240 GWh in Europe by 2030. The Group will be basing these on a standardised factory concept; the Salzgitter headquarters will serve as a blueprint for the plants across Europe and set new standards in terms of sustainability and innovation. 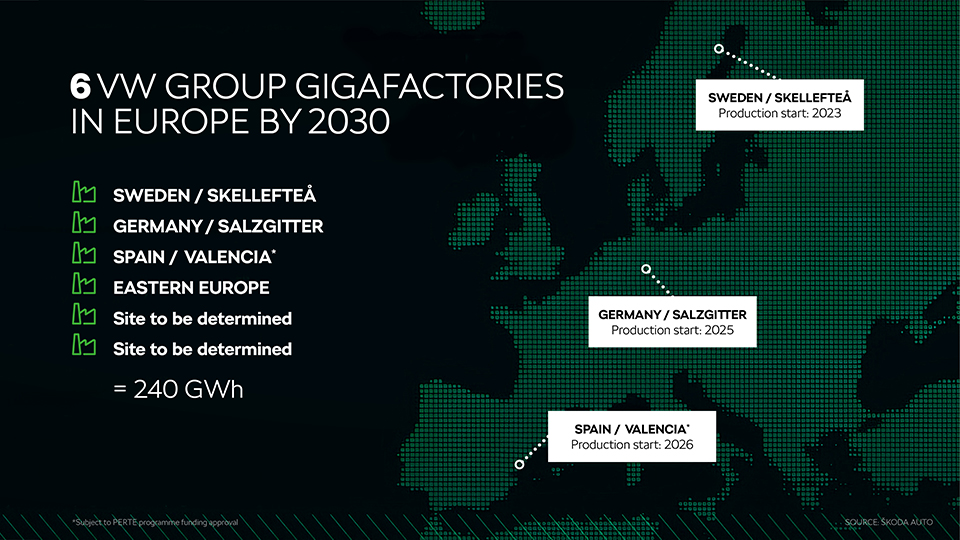 “What we have put to the test millions of times over with vehicle platforms such as the MQB and MEB will also lay the foundation for establishing cell production: we will be standardising on the basis of European standards and upscaling. This way, we will combine speed and cost optimisation with the highest quality levels.” – Frank Blome, PowerCo CEO

Standardisation will not only cover equipment, buildings and infrastructure but also products, processes and IT. This will also enable factories to be rapidly converted for future product and manufacturing innovations. Each factory will run entirely on renewable electricity and will be designed for future closed-loop recycling.

Battery production is a chemical-technological process, with a cathode and anode being produced for each cell. The process begins by mixing the feedstock into a paste, which is then deposited on a thin metal film. This is followed by drying and compacting the layer by rolling and trimming it to the required size. The complexity of this process lies in the precisely defined parameters that are essential for the quality of each battery, for example, maintaining the correct concentration, viscosity, homogeneity and residual moisture. The next step in the process is producing the battery cell itself. First, the electrodes (cathodes and anodes) need to be stacked and then wrapped in protective packaging. Before sealing the package, the electrolyte is fed into the cell. The next step is the formation process, where the battery cells are electrically charged for the first time. Only then is the cell hermetically sealed and finally tested.