Everything via smartphone: Reserving and unlocking electric vehicles and hooking them up to the charging station. Continental to launch fleet testing of digital smartphone key in Bordeaux. According to the United Nations Population Fund, more people worldwide have been living in cities than in rural areas since 2008. A lack of parking space, short distances, … Continued

Everything via smartphone: Reserving and unlocking electric vehicles and hooking them up to the charging station. Continental to launch fleet testing of digital smartphone key in Bordeaux.

According to the United Nations Population Fund, more people worldwide have been living in cities than in rural areas since 2008. A lack of parking space, short distances, and rising traffic congestion are prompting more and more city residents to look for inexpensive alternatives to having a car of their own. Car sharing and vehicle fleets at the workplace are shaping up as possible solutions. The international automotive supplier Continental is now making these offers even more attractive by means of a new key technology: A digital car key wirelessly installed in a smartphone together with a special utility program for cell phones could revolutionize the spontaneous rental of cars. Together with Veolia, EVTRONIC, Mercur, and Proxiway, Continental has now started a field test in Bordeaux with a fleet consisting of electric vehicles. The goal is to create an electric vehicle fleet, which different small and medium enterprises could operate in car sharing. The users gain access to the vehicle by Smartphone and, in addition, they can reserve quick charging stations via the cell phone app. As technology partner in the project, Continental is launching a complete car sharing solution, including the smartphone car key, the in-car electronics, and the fleet management.

“The smartphone offers users of the electric vehicle fleet in Bordeaux everything from a single source: the car hire station, the car key, and the charging station. The technology provided by Continental for the digital key makes the system particularly convenient, easy, and flexible for operators and users,” explains Andreas Wolf, head of Continental’s Body & Security business unit. 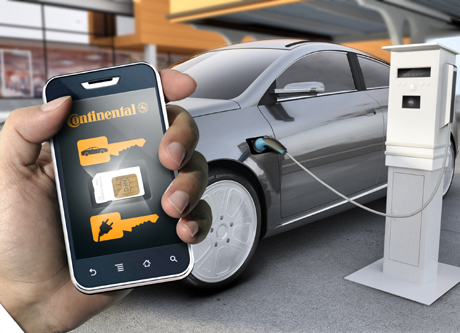 Carsharing via cellphone: Continental’s digital keys in the secured element of the smartphone allow access and start of the electric vehicle and authorize use of the charging station, too.

A special app for smartphones makes it possible to rent a vehicle from the car sharing fleet. The user can use the utility program to find, select, and reserve vehicles in the city region. The smartphone can even navigate the user to the car’s location. It’s even possible to rent a vehicle spontaneously: As soon as the user holds his or her cell phone against a free car, a digital key is generated and sent to the smartphone once an availability check has been carried out on the server. The digital key unlocks the car and, depending on how it is programmed, the app retrieves further data on the condition of the vehicle, before switching to a convenient navigation system. The same principles allow users to reserve a charging station time slot by cell phone app, identify themselves with their cell phone via NFC, and initiate the quick charging process.