In the release of its Commercial Vehicle Dealer Digest, ACT Research noted that the heavy truck and trailer industries are heading for a market correction in 2020, even as the US economic picture remains largely unchanged, aside from concerns about trade and tariffs. The key driver of the near to mid-term outlook is the US consumer, who remains well positioned to keep the economy out of the ditch, even as key freight-generating sectors of the economy take a pause.

“Data that support our forecast of an impending market correction continue to mount, with the biggest driver of the change for both Class 8 and trailers being the continued building of new equipment inventories in 2019 that will require right-sizing in 2020,” said Kenny Vieth, ACT’s President and Senior Analyst. He continued, “Since March 2018, ACT’s forecasts have targeted 2019’s third quarter as the point at which the supply of Class 8 tractors and demand for freight services would likely tip so far as to break the current period of peak vehicle production, as demand reverts to the mean. Current data and anecdotes make a strong case that the call for a Q3 inflection remains intact.” 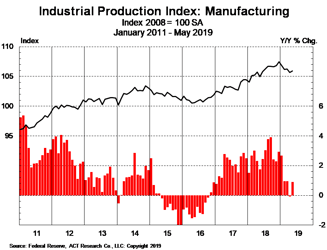 Vieth added, “We monitor freight volumes and rates, fleet growth, and other metrics that point to the impending demise of the current upcycle in heavy CV demand.” He added, “Economic data of note this month came from weak manufacturing industrial production. As well, durable goods orders have stagnated, as have the ISM and Markit Purchasing Managers’ indices, while building permits have been down year-over-year for the past six months.” Vieth concluded, “Over time, the shape of the IP series, if at different percentages, broadly mirrors the shape of the Class 8 cycle.”

ACT Research is recognized as the leading publisher of commercial vehicle truck, trailer, and bus industry data, market analysis and forecasting services for the North American and China markets. ACT’s analytical services are used by all major North American truck and trailer manufacturers and their suppliers, as well as banking and investment companies. More information can be found at www.actresearch.net.

BMW launches its world-first eDrive Zones technology in the UK

Subaru: Notice regarding completion of payment for disposal of own shares as restricted stock compensation