Introducing a people-friendly, next-generation taxi that embodies the spirit of Japanese hospitality People-friendly universal design1, including low, flat floor and wide-opening rear sliding door Designed to harmonize with urban life but instantly recognizable as a taxi at a glance, with a deep indigo body Equipped with reinforced safety equipment, including Toyota Safety Sense C and … Continued

Introducing a people-friendly, next-generation taxi that embodies the spirit of Japanese hospitality

The JPN Taxi embodies the spirit of Japanese hospitality. It was developed to provide usability and comfort to a wide range of people, including children, seniors, wheelchair users, and visitors to Japan from abroad. Toyota aims to change Japan’s landscape, develop barrier-free cities, and transform Japan into a tourist-oriented country by promoting the widespread use of its JPN Taxis.

The new model showcases a people-friendly, universal design that provides usability and comfort to a wide range of people through continual innovations and improvements, from grab handles to the overall vehicle structure. Design features include a low, flat floor, making it easy for customers to ingress and egress from the taxi, a wide-opening, power rear sliding door (left side only) and space to accommodate wheelchair users3.

In addition, the taxi is designed to beautifully complement the cityscape while at the same time being easily recognizable as a taxi. This is achieved in part due to the car’s styling, which aims to transcend trends and serve as a timeless classic model, as well as the body’s deep indigo (koiai) tone, a traditional color that has long been a symbol of Japan.

Furthermore, this model offers the driver an optimal range of vision, in part through innovations to the position and shape of the pillars and the use of fender mirrors. As a design priority for this taxi model, functionality was improved by positioning the dashboard instruments and other devices in the taxi to allow easy access, including the placement of the GPS system and taxi meter in a spot that is easy for customers to see.

Toyota began its venture into the taxi industry in Japan in 1936 with the introduction of the Toyota Model AA. In 1953, Toyota released the Toyopet Super RH model and other vehicles, which have become fixtures helping transport many people over the years. Toyota taxis have and will continue to travel greater distances than the average vehicle and be used in the toughest road conditions. This could be considered the starting point for automobiles that pursue a vision of ideal automotive development.

Toyota looks forward to exhibiting its JPN Taxi at the 45th Tokyo Motor Show 2017, and also plans to use the taxi to greet visitors from around the world in 2020, when Tokyo hosts the Olympic and Paralympic Games.

NOTE: The indigo blue limited edition model is the same price (an indigo blue car featuring advertising of the Tokyo 2020 Olympic and Paralympic Games logo on the rear door).

*1Includes consumption tax and does not include recycling fees. Separate pricing applies for Hokkaido and Okinawa. 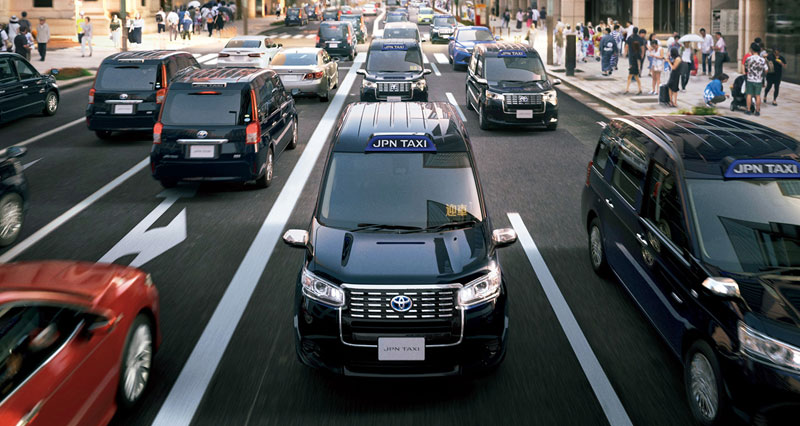 The photo above is an example of where the taxi roof sign would appear on the front and rear of the roof (display and shape vary by taxi company).
Interior
The driver’s seat is a functional space suitable for professional use while the cabin is designed to offer a hospitable space and riding comfort to a variety of customers.
Passenger space
Driver space
Luggage compartment
Exterior Colors
The new model will be offered in three colors, including the newly developed koiai deep indigo. Koiai is a color born from the hearts of the Japanese, who have worn indigo-dyed clothing since ancient times. Indigo has been an integral part of the lives of the Japanese. Outside of Japan, deep indigo is referred to as Japanese indigo, and this is what was used as the base for developing koiai. Toyota’s goal was to contribute to a beautiful and uniform cityscape with a fleet of koiai-colored taxis. The taxi’s exterior allows for flexible use in a wide range of scenarios, from daily use to formal occasions and business. Furthermore, owing to its superior repairability, all the colors contribute to the vehicle’s economy.

1Universal design is the practice of making products that anyone, including seniors, wheelchair users, pregnant women, and people traveling with children, can easily use. The JPN Taxi conforms to the certification guidelines (Level 1) for the Japanese government-approved standard specifications for a universal design taxi.

3In certain cases, passengers may be prevented from boarding the taxi depending on the shape of their wheelchair or rolling performance. In accordance with transportation rules, individuals may be asked to move to a safe location to board in the event that safety cannot be ensured. Visit the following site for details: http://toyota.jp/jpntaxi/

4Under the Japanese Ministry of Land, Infrastructure, Transport and Tourism’s JC08 test cycle.

6Nanoe and the Nanoe logo are trademarks of Panasonic Corporation.

JPN Taxi is scheduled to be exhibited at the Tokyo Motor Show and will also be showcased in a planned excursion tour around the Tokyo Bay area for nine days from October 28 (Saturday) to November 5 (Sunday), departing from both Tokyo Big Sight and Mega Web, Toyota’s vehicle experience facility in Tokyo’s Koto Ward.

Link to the “JPN Taxi” webpage (Japanese only)
http://toyota.jp/jpntaxi/

Ford returns to Formula 1; Strategic partner to Oracle Red Bull Racing for 2026 season and beyond