SSAB, LKAB and Vattenfall announced today that they have formed a joint venture company to continue to drive the HYBRIT initiative. The three companies will each own one third of the company, which will seek to develop a steelmaking process that emits water instead of carbon dioxide. “HYBRIT is a very important initiative for SSAB … Continued

SSAB, LKAB and Vattenfall announced today that they have formed a joint venture company to continue to drive the HYBRIT initiative. The three companies will each own one third of the company, which will seek to develop a steelmaking process that emits water instead of carbon dioxide. 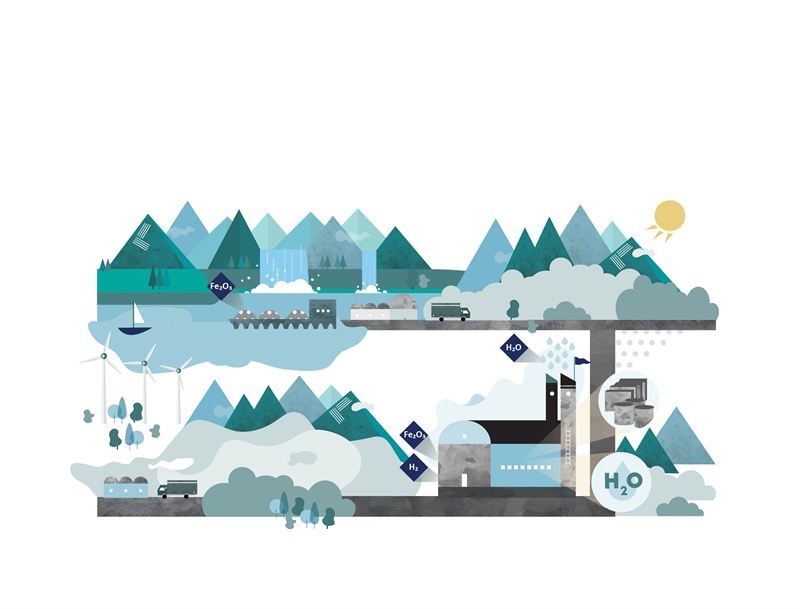 “HYBRIT is a very important initiative for SSAB and a fossil-free Sweden by 2045. A joint venture company will enable us to work together effectively to eliminate the root cause of carbon dioxide emissions in the steel industry,” said Martin Lindqvist, President and CEO of SSAB .

“Our establishment of a joint venture to develop HYBRIT indicates our conviction that it is possible to develop a fossil-free production chain all the way from the mine to the steelworks. If we’re successful, this will be a technology breakthrough that can make a global contribution to significantly limiting climate change,” said Jan Moström, President and CEO of LKAB.

“By taking this step, we are making clear our activities and determination to find solutions to the climate issue. Vattenfall can see that electrification of the industry and climate-smart hydrogen gas have an important role to play,” says Magnus Hall, President and CEO of Vattenfall.

As a result of forming the joint venture company, a recruitment process is under way to appoint a CEO. The Board of Directors comprises Martin Pei, chairman, Åsa Sundqvist, member, Andreas Regnell, member and Olle Wijk, non-voting member

Last spring, SSAB, LKAB and Vattenfall launched an initiative to solve the carbon dioxide issue in the Swedish steel industry. By replacing today’s blast furnace process that uses coal and coke with a process based on hydrogen gas, the aim is to develop a process that emits water rather than carbon dioxide.

Since its launch, the initiative has received various support from the Swedish Energy Agency, including funding towards a four-year research project.

This initiative is divided into three phases: a preliminary study up to the end of 2017, followed by research and pilot plant trials up to 2024. Finally, up to 2035 the plan is to perform trials in a full-scale demonstration facility.

Sweden is uniquely qualified to undertake this initiative. It has a specialized and innovative steel industry, access to climate-smart and renewable electrical power, and the best-quality iron ore in Europe.

To achieve this project, however, significant national contributions are still required from the state, research institutions and universities.

On July 5, 2017, a debate on HYBRIT will be held in Almedalen. The topic is “Concern for the climate – solutions exist, but perhaps not where you think”. Presenters include Martin Pei, CTO, SSAB, Jan Moström, President and CEO, LKAB, and Magnus Hall, President and CEO, Vattenfall.

Venue: Dagens Nyheters Arena at Visby Strand at 14.15-15.00. You can also view the debate live on facebook.com/ssab.ab

“HYBRIT – the way to fossil-free steel” is a Joint Venture company between SSAB, LKAB and Vattenfall. By replacing coke and coal with hydrogen gas in steelmaking, the ambition is to achieve a process that discharges water, rather than carbon dioxide. This initiative was announced in the spring of 2016 and a Joint Venture company was formed one year later. Research will take place up to 2035. If this initiative is successful, HYBRIT will make a major contribution to a fossil-free Sweden.”

SSAB is a Nordic and US-based steel company. SSAB offers value added products and services developed in close cooperation with its customers to create a stronger, lighter and more sustainable world. SSAB has employees in over 50 countries. SSAB has production facilities in Sweden, Finland and the US. SSAB is listed on Nasdaq Stockholm and has a secondary listing on Nasdaq Helsinki. www.ssab.com .

50 years of the Renault 5: A year of pop and surprises

Almost 200 zero-emission Solaris buses to go to the Norwegian capital!