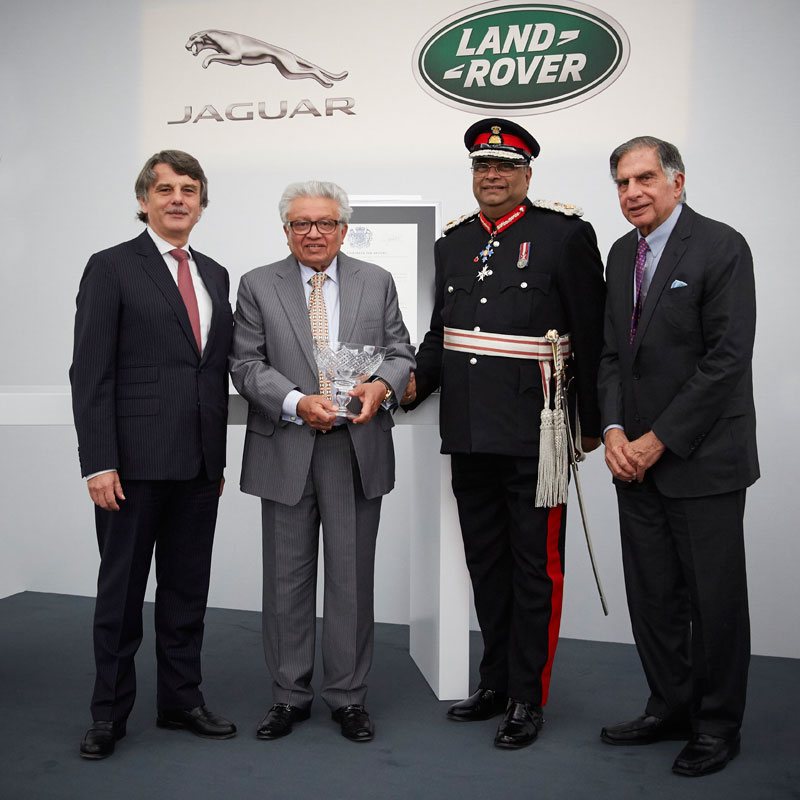 Jaguar Land Rover has been presented with a 2015 Queen’s Award for Enterprise in Sustainable Development, for reducing the environmental impact of its products and its operations.
Jaguar Land Rover’s CEO Dr Ralf Speth today received the prestigious accolade from Her Majesty’s Lord-Lieutenant of West Midlands, Mr. Paul Chandrasekharan Sabapathy CBE.

Dr Ralf Speth said “Jaguar Land Rover is honoured to receive this 2015 Queen’s Award for Enterprise in Sustainable Development. We are focused on growing a long-term, sustainable business, as leaders in environmental innovation and making a positive impact on society.”
This is the 14th Queen’s Award that Jaguar and Land Rover has received since 1967. It follows a 2014 award for Enterprise in International Trade, for outstanding overseas sales growth.

The company’s 8,000 designers and engineers take a ‘whole lifecycle’ approach to vehicle development, aiming to reduce impact on the environment right through from raw materials to eventual vehicle disposal. These measures have already helped significantly reduce CO2 emissions, with the company’s EU fleet now 25% lower than in 2007.

Jaguar Land Rover is a world leader in the design and manufacture of aluminium-intensive vehicles, pioneering the use of closed-loop processes to drive recycled content and reduce environmental impacts across the lifecycle. Benefits include weight saving, higher fuel efficiency, lower emissions, improved crash safety and even better vehicle dynamics.

Hybrid technology is another area that has seen significant Jaguar Land Rover investment in recent years. The Range Rover Hybrid and the Range Rover Sport Hybrid are now both available, using an advanced hybrid system and without compromise to their renowned all-terrain capabilities.
Jaguar Land Rover has also significantly reduced its operational energy, waste and water usage at its UK manufacturing plants. The company’s new Engine Manufacturing Centre has been designed and built with strong emphasis on sustainability, including the UK’s largest rooftop solar panel installation, which will generate up to 30% of the site’s energy.

Doubling the workforce and increasing skills

Jaguar Land Rover’s approach also contributes to social, economic and leadership dimensions of sustainable development. The company is helping to address the UK skills gap with a training and skills programme aimed at young people. (STEM initiatives) and has recruited 2,000 apprentices and graduate engineers in the last four years, whilst also investing in on-going training to develop engineering skills among its workforce.
“Jaguar Land Rover is a business driven by design, technology and innovation. It is critical that we attract talented young people to become the next generation of engineers to support our growing business,” said Dr Speth.

The company also has a sector-leading global Corporate Social Responsibility programme to deliver opportunities for 12 million people worldwide by 2020.

In addition to its Queen’s Awards, Jaguar Land Rover is proud to be the only automotive company to hold all three Royal Warrants, as an official supplier of goods and services to the households of HM The Queen, HRH The Duke of Edinburgh and HRH The Prince of Wales.

Renault and TheArsenale unveil AIR4: where we are going, we don’t need roads