Home › Articles › Autonomous Mobility Articles › From physical to virtual: will technology see the end of the traditional crash test?

From physical to virtual: will technology see the end of the traditional crash test?

Physical crash tests historically separate the safe cars from the unsafe, but all aspects of crash testing – including the dummies themselves – are now migrating from physical to virtual reality. By Rachel Boagey

Structural design and safety systems protect vehicle occupants in the event of a crash. But only independent crash tests under controlled conditions can differentiate one car from another and determine just how well a car performs under crash conditions.

As part of its New Car Assessment Programme (NCAP) in the US, the National Highway Traffic Safety Administration (NHTSA) scores cars using a scale of one to five stars; the higher the number of stars, the lesser the likelihood of injury or death. The Insurance Institute for Highway Safety (IIHS) uses a four-level scale: Poor, Marginal, Acceptable, and Good. In Europe, China and Latin America, NCAP also scores cars on a scale of one to five stars. But in the face of virtual simulation, these traditional crash testing methods may be under threat of going the way of so many other traditions.

IIHS tests evaluate two aspects of safety: crashworthiness – that is, how well a vehicle protects its occupants in a crash; and crash avoidance and mitigation – namely the technology that can prevent a crash or lessen its severity. Asked about virtual crash testing, Russ Rader, Senior Vice President, Communications at the IIHS, told Megatrends he believes that the tests conducted by the organisation will remain in the physical realm.

“We don’t see virtual crash tests changing or replacing the laboratory crash tests we conduct at IIHS,” he observed. “Computer simulations help automotive engineers design new vehicles without having to crash real cars over and over. They won’t change the crash tests conducted by IIHS, which are designed to explicitly demonstrate for consumers the differences in how vehicles would protect them and their families in the real world. We need to conduct tests of real vehicles in order to do that.”

General Motors says it uses simulated crash tests to help it build safer cars. While a few decades ago, OEMs might need to crash over a hundred cars during the design of a single model, now, thanks to computer-aided engineering, its engineers can crash a fraction of that number, all while designing new, safer models much quicker and more cheaply. John Capp, Director of Global Safety Strategy and Vehicle Programmes at GM explained to Megatrends, “Simulated crash tests allow us to learn earlier in the design process before the hardware is available and built, and also optimise the performance across a broad range of test conditions.”

Eight decades after GM engineers developed the first barrier crash test, physical crash testing continues to provide engineers with great insight into how vehicles perform under crash conditions. But it takes time. “There’s still a place for physical crash tests, for example to validate the models, confirm the performance, or in cases where the simulation capability is still evolving.”

The end of the physical dummy?

The possibility of virtualisation extends beyond the crash test into multiple areas such as the dummies used in the current physical tests.

Studies show that roughly half of drivers take defensive action, such as sudden braking or steering, to avoid collisions, with vehicle occupants commonly bracing themselves at the same time. Occupant posture – whether braced or relaxed – has a significant effect on body movement during a collision. However, the dummies currently used in virtual crash simulations are unable to simulate the reflexive defensive actions that humans take in the moments before an imminent collision, such as bracing one’s body for impact.

For this reason, crash test dummies are at the core of car safety research, and along with the possibility of physical crash tests giving way to the virtual, we may also be about to witness the last generation of physical crash test dummies. Toyota very recently showcased its latest crash dummies – THUMS 5 – capable of replicating human behaviour before a crash, and now, research into virtual crash dummies is the largest coordinated effort in car safety.

A physical crash dummy effectively acts like an airliner’s black box recorder, recording data and in this case registering impact forces during a crash. Manish Menon, Research Analyst at Frost & Sullivan, suggests that a physical crash dummy cannot currently assess danger and therefore replicate a human occupant’s behaviour. “Virtual crash test dummies from now will be capable of replicating pre-collision human reactions,” Menon notes. “The muscle modelling feature simulates the body attitude of the vehicle occupant from relaxed to braced, thereby allowing for a more detailed computer generated analysis of post-crash injuries. This allows for accurate study of the performance of seatbelts, airbags and other passive safety equipment during a collision. This difference alone signals that the end for the physical test dummies is near.” 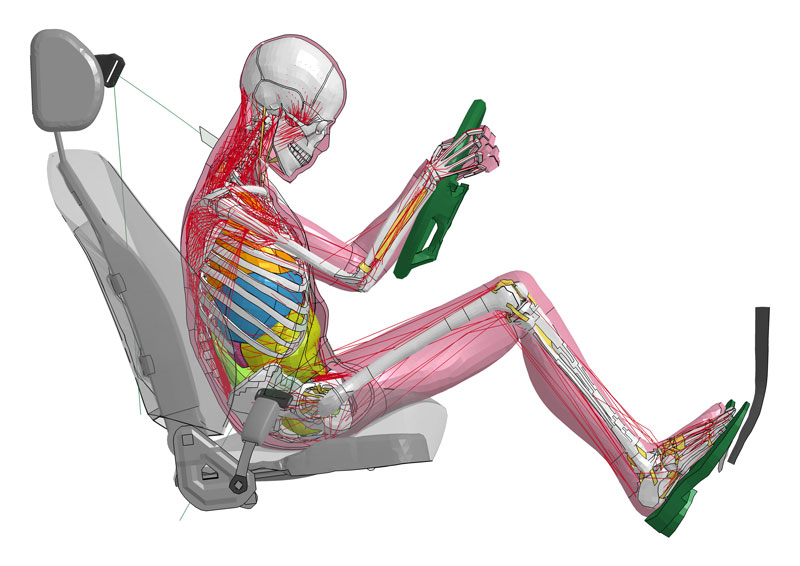 Menon notes that OEMs might look at completely eliminating the use of physical test dummies in favour of virtual dummies. “On the safety side, the virtual test dummies offer unparalleled advantages, from accurately modelling pre-collision human movements to various other parameters such as muscle tension while pre-braking.”

Apart from accurately determining pre-crash human behaviour, such as muscle tension while pre-braking, what interests OEMs the most about virtual test dummies is the potential to save cost and time, says Menon. “At present, a single state-of-the-art crash dummy will cost an OEM between US$50,000 to US$600,000 when all the electronics are accounted for. The whole process of crash-testing itself is expensive, with estimates of many thousands of dollars for a vehicle prototype.” By using virtual test dummies, OEMs can significantly cut down not only cost but also several months of lead time. “OEMs have drastically increased the number of virtual tests on a component level for safety. Using a virtual dummy to verify these tests will not only reduce costs but also save OEMs development time.”

GM’s Capp notes that simulating the human body in a crash is challenging, but has been taken on by a consortia of OEMs and researchers for a number of years. “It involves physical testing, simulating and medical knowledge to try to capture the important aspects of the behaviour of a human.”

A closer inspection of the issue at hand, however, reveals creases that need ironing out before physical crash dummies can be completely replaced by their virtual cousins. “The virtual human body is too complex to be incorporated into a physical crash test dummy. Therefore it becomes imperative to verify the algorithm against all possible human behaviour just before a collision,” states Menon. Modelling the human brain might then be the biggest challenge, as each brain reacts differently to a particular situation. “To effectively use these sophisticated human representatives would require more effort than merely calibrating software for linear progression,” he says.

Menon continues, “Physical dummies will continue to be relevant for the foreseeable future, continuing to do what they were introduced for – logging data.” And he sees an important future for physical crash dummies: “In future, the physical test dummies can be used to gauge the occupant interaction with different safety systems at the very start of vehicle design. Then the virtual crash dummies can take over to investigate occupant percentile variations, age variations, gender variations, children variation, obesity (BMI) variations, and muscle tension in pre-braking, for example. Finally, the physical test dummy can validate and further fine-tune the human-vehicle interaction.”

While the world of vehicle safety engineering may not be ready to give up the crash test dummy in favour of the human computer model just yet, much work is being done in this area. Dr. Christophe Bastien, Principle Lecturer in Engineer Simulations at Coventry University in the UK spoke to Megatrends about the potential for the future crash test dummy to lie in the virtual rather than the physical world.

Bastien, who has spent his career working in occupant safety, noted that thanks to crash test dummies, the level of fatalities on the road in the last 30 years has improved greatly, and suggested that we need crash test dummies to provide pointers to engineers to design safer vehicle structures. Bastien agrees with the notion that crash test dummies are merely machines which record acceleration, displacement and forces. “These metrics are linked with injury criteria which are used to predict, statistically, risks of injuries. As a crash test dummy needs to be used many times, it has to be repeatable and unbreakable, which is contradictory to a human being.” Dummies are not surrogates for human beings, and some metrics in the crash test dummies are still deliberated, he noted: “The sentiment to use these metrics goes in the right direction for safety: they are practical to measure and to engineer. Nevertheless, this is still unsatisfactory: only human models can answer trauma injuries.” 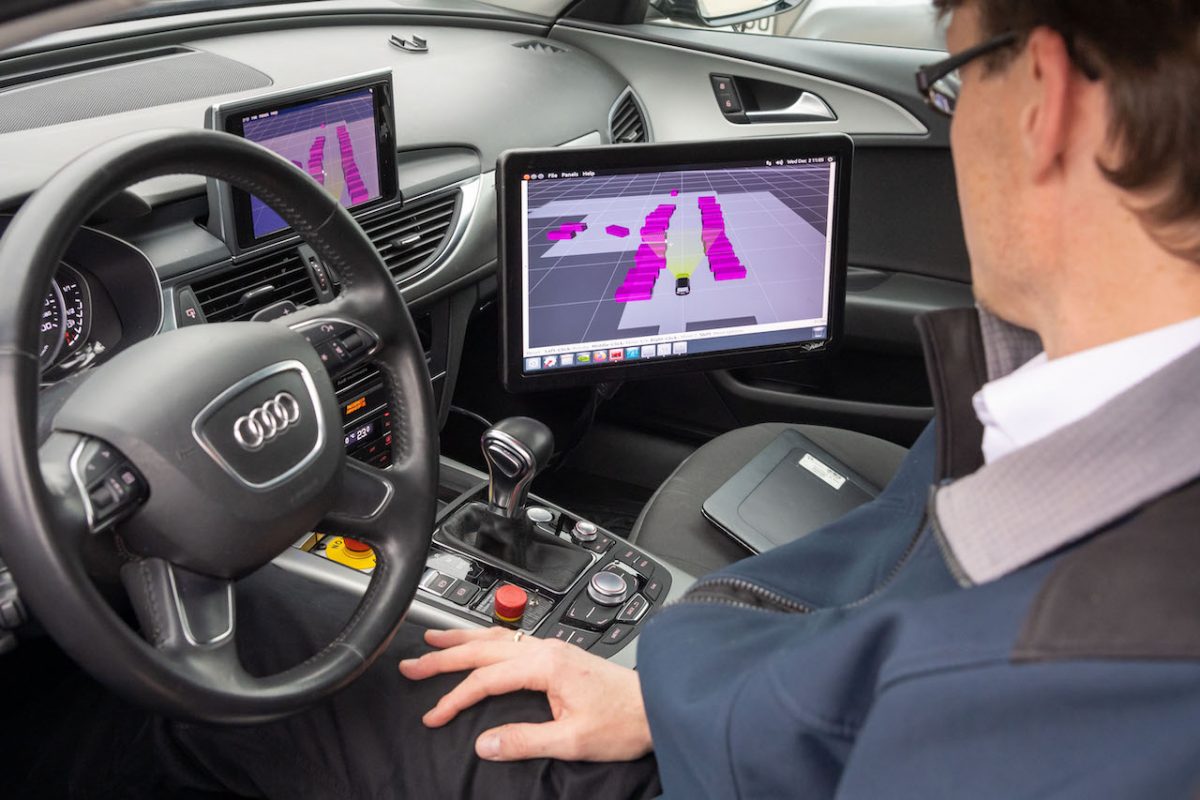