While the great recession has fundamentally reshaped the automotive industry over the past few years, the real game changer may come from a new post-recession consumer mindset, demographic shifts and how automakers respond.“Just as everyone is breathing a huge sigh of relief about getting back to something resembling normal sales levels, the real news is that the great recession has dealt a fundamental change to the consumer’s mindset,” said Jim Farley, executive vice president of Global Marketing, Sales and Service and Lincoln. “The question of whether consumers are returning to the market is settled. Now the question is, ‘What do they want and expect from us, and are we really ready to respond to what has just taken place?’”

Delivering the keynote address at the 2013 New York International Auto Show, Farley said the recession has profoundly influenced how consumers weigh purchase decisions and what they value in automobiles. He highlighted several key post-recession trends that will drive industry change – shifting expectations around luxury, the rise of women and Hispanics, a renewed focus on fuel economy, and the rapid proliferation of mobile platforms.

New luxury expectations
Luxury is no longer defined by price, size and exclusivity. “Now, people are breaking the association of luxury with a high price tag,” Farley said. “They are looking for luxury-level quality, performance and features in smaller sizes and at more reasonable price levels.”

He noted that a recent Luxury Institute survey found 60 percent of respondents expect a fully equipped luxury vehicle to cost less than $60,000 – significantly less than the former $100,000 price tag standard on many luxury models.

Another luxury trend: Small utilities are outpacing all other luxury vehicle segments for growth, with nearly a 60 percent jump in 2012 and a more than 200 percent increase in the past four years.

Women, Hispanics transforming the market
While baby boomers will continue to wield the greatest influence on the market for years to come, Farley pointed to shifts among women, Hispanics and millennials that are reshaping the entire consumer market.

Perhaps the most powerful trend is the rising consumer power of women globally. “More than 1 billion women will enter the middle class globally by 2020, and many will be buying vehicles for the first time,” Farley said.

Rapid urbanization is drawing women to cities all over the world, where they are trading agricultural work for careers in business and other professions. Women buyers are outpacing men for the first time ever in the United States.

“As Hispanics buy luxury vehicles at a faster rate than the overall market, our brands must become more compelling, interesting and relevant than ever,” Farley said. “Millennials are also a significant opportunity, as they will start entering the family stage in record numbers during the next several years.”

The power of mobile platforms: Facebook and Google
Mobile devices are significantly reshaping every part of the automotive landscape – from marketing and shopping to the in-vehicle experience. “We need to learn to think the way our customers already do – they come first, they are in control,” Farley said. “Most of us recognize that mobile is a power enabler for customers, putting them in control of the shopping process and changing their expectations around connectivity.”

As nearly one in seven people worldwide now uses a smartphone, this has significant influence on the auto industry.

Doug Frisbie, Facebook head of Automotive Vertical Marketing, joined the keynote, explaining that successful businesses in every industry – from automakers to software companies – put people at the center.

“Cars were a step change in giving society the ability to stay connected and engaged with the people they cared about,” he said. “The opportunity at hand today is not about phones or social software in cars – but about remembering that no matter the device, it’s the ability to connect that matters.”

Brendon Kraham, Google director of Global Mobile Sales and Product Strategy, joined the discussion as well, adding that the in-car mobile experience will soon be integrated into all the devices that connect a consumer’s life.

“Automobiles will soon become a seamless part of the consumer mobile experience,” he said. “Actually it will enhancethe experience. When your dash becomes a seamlessly connected screen, it truly becomes a more important, integrated part of your life.”

Fuel economy reigns
Perhaps the greatest cross-demographic shift since the recession is the growing consumer focus on fuel economy. Now the top consideration for vehicle purchases, fuel economy interest has resulted in a flood of claims and data that are starting to overwhelm the market.

“We now have a torrent of ‘best-in-class’ claims hitting consumers from all sides, and it’s starting to become noise,” Farley said. “We are seeing more and more confusion as consumers try to make informed decisions. Given the connectivity in our cars and the proliferation of mobile devices, we have the opportunity to give consumers better and more relevant data to understand what they can expect in on-the-road fuel economy performance.”

Harnessing the power of mobile platforms, Farley announced developers will have access to Ford’s OpenXC connectivity research platform as a sandbox to create and test innovative ideas in the newly announced $50,000 Personalized Fuel Efficiency App Challenge. 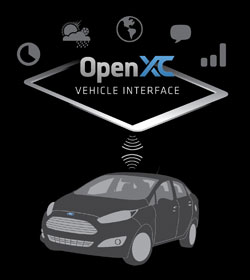 Many elements factor into personalized fuel efficiency including temperature, terrain, traffic conditions and individual driving styles. The goal of the challenge is to enable drivers to optimize their efficiency on the road and then share that information with others.

“We need to help customers understand the concept of personal fuel economy – based on their own individualized experiences – and give them tools to see, learn and act upon all the information available to know what to expect, how to improve, and even offer guidance in their shopping process,” Farley added.