The National Transportation Safety Board released Highway Accident Brief 19/06 Thursday, detailing the agency’s investigation of the Nov. 8, 2017, minor collision between a commercial truck and an autonomous shuttle in Las Vegas.

The truck driver’s actions and the autonomous vehicle attendant’s lack of easy access to a manual controller are cited in the probable cause for the collision. There were no injuries to the seven passengers and one attendant aboard the shuttle or to the driver of the truck. The accident caused minor damage to the lower left front of the shuttle’s body and a minor abrasion to the truck’s tire.

“The NTSB would normally not investigate a minor collision, but the involvement of a highly automated vehicle warranted having our investigators examine the circumstances surrounding the collision,” said Kris Poland, Deputy Director of the NTSB’s Office of Highway Safety. “We wanted to examine the process of introducing an autonomous shuttle onto public roads as well as the role of the operator, the vehicle manufacturer, and the city. The NTSB also examined the technology and the safety considerations that were in place at that time,” said Poland.

The autonomous shuttle was a two-axle, battery-powered, test vehicle designed primarily for autonomous operation and therefore did not have a steering wheel, brake pedal, or accelerator pedal. The shuttle allowed for manual operation using a hand-held controller. The shuttle could operate autonomously only on a predetermined route that had been fully mapped. The route was planned by Keolis (a public transportation service operator), Navya (the shuttle manufacturer) and AAA (sponsor of the shuttle) with input from the city. Navya and Keolis had the required state and federal approval to test autonomous shuttle operations on public roads. 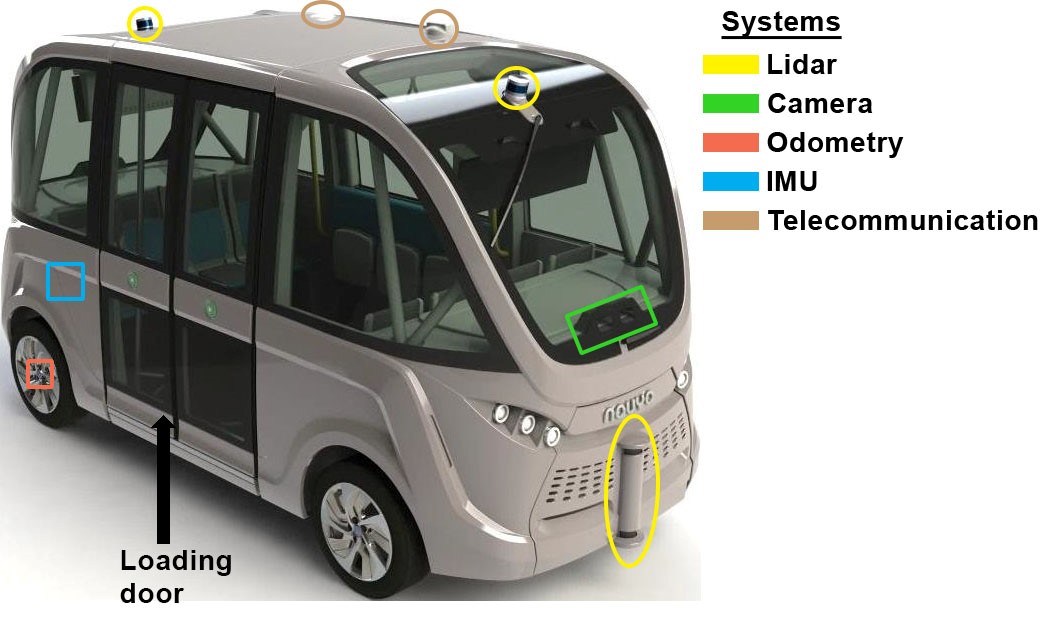 (Detailed in this graphic are the locations of external sensors and communication devices that guided the autonomous vehicle involved in the Nov. 8, 2017, collision in Las Vegas. NTSB graphic adapted from Navya’s owner’s manual)

The shuttle was equipped with numerous sensing devices that provided a 360-degree view of the environment with hazard detection capabilities. Some of the sensing devices included eight light detection and ranging (lidar) sensors, two stereoscopic cameras and a differential global positioning system. The shuttle was also equipped with a dedicated short-range communication system and a long-term evolution antenna that communicated with traffic signals along the route. Navya could monitor the shuttle’s performance in real time from its control center in Lyon, France. The shuttle was equipped with a Lytx DriveCam monitoring and recording device that tracked driving metrics and recorded telematic and visual information triggered by critical events.

Prior to the collision the hand-held controller for manual operation was stored in an enclosed space at one end of the passenger compartment and the attendant did not retrieve the controller during the event. Since the accident, Keolis implemented a new policy to make the controller more accessible, allowing attendants to remove the controller from storage at the start of a trip and keep the controller available throughout a trip.

Unveiling: A first look at the new Opel Mokka