UK new car registrations fell -22.0% in August, according to the latest figures from the Society of Motor Manufacturers and Traders (SMMT)

UK new car registrations fell -22.0% in August, according to the latest figures from the Society of Motor Manufacturers and Traders (SMMT). 68,033 units were registered in what is traditionally one of the quietest months of the year for new car registrations ahead of the important plate-change in September. 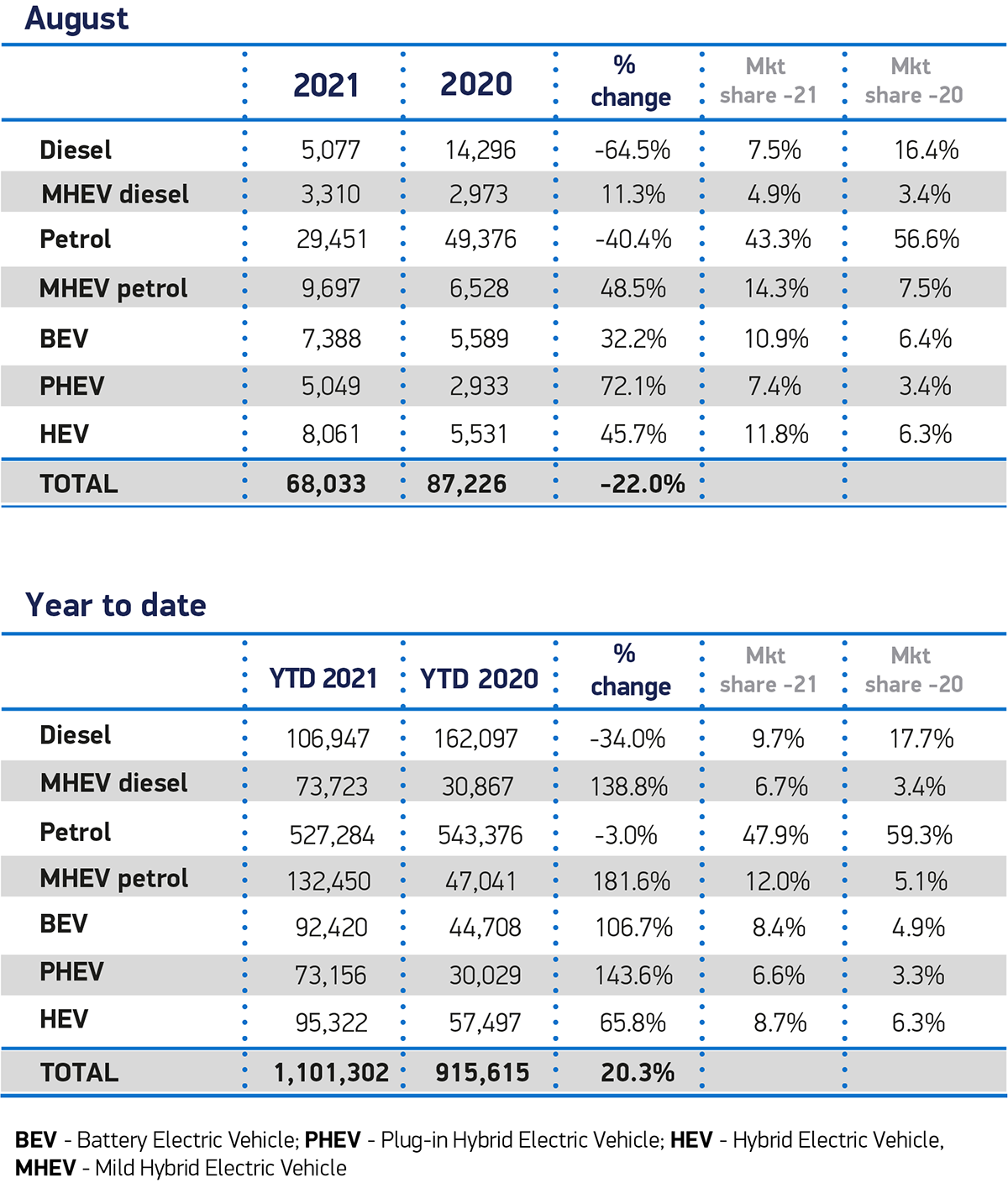 Demand for the latest battery electric (BEV), hybrid (HEV) and plug-in hybrid (PHEV) vehicles, however, surged, up 32.2%, 45.7% and 72.1% respectively. In fact, demand for PHEVs has outpaced BEVs in five of the last six months since changes to the Plug-in Car Grant, affecting BEVs, were introduced in March.2 There are now some 130 plug-in models on the market, with the range ever-increasing.

Registrations by private, business and fleet buyers all fell by double digits in the month with fleet purchases down -27.5%, a loss of 12,627 units. Private activity held up better, registrations dropping -15.2% to 33,771 units, meaning that just shy of half (49.6%) of all sales in August were driven by private consumers. The mini segment was the only car bodystyle to see growth, up 30.7%, but with just 902 registrations it is a segment prone to greater fluctuations. 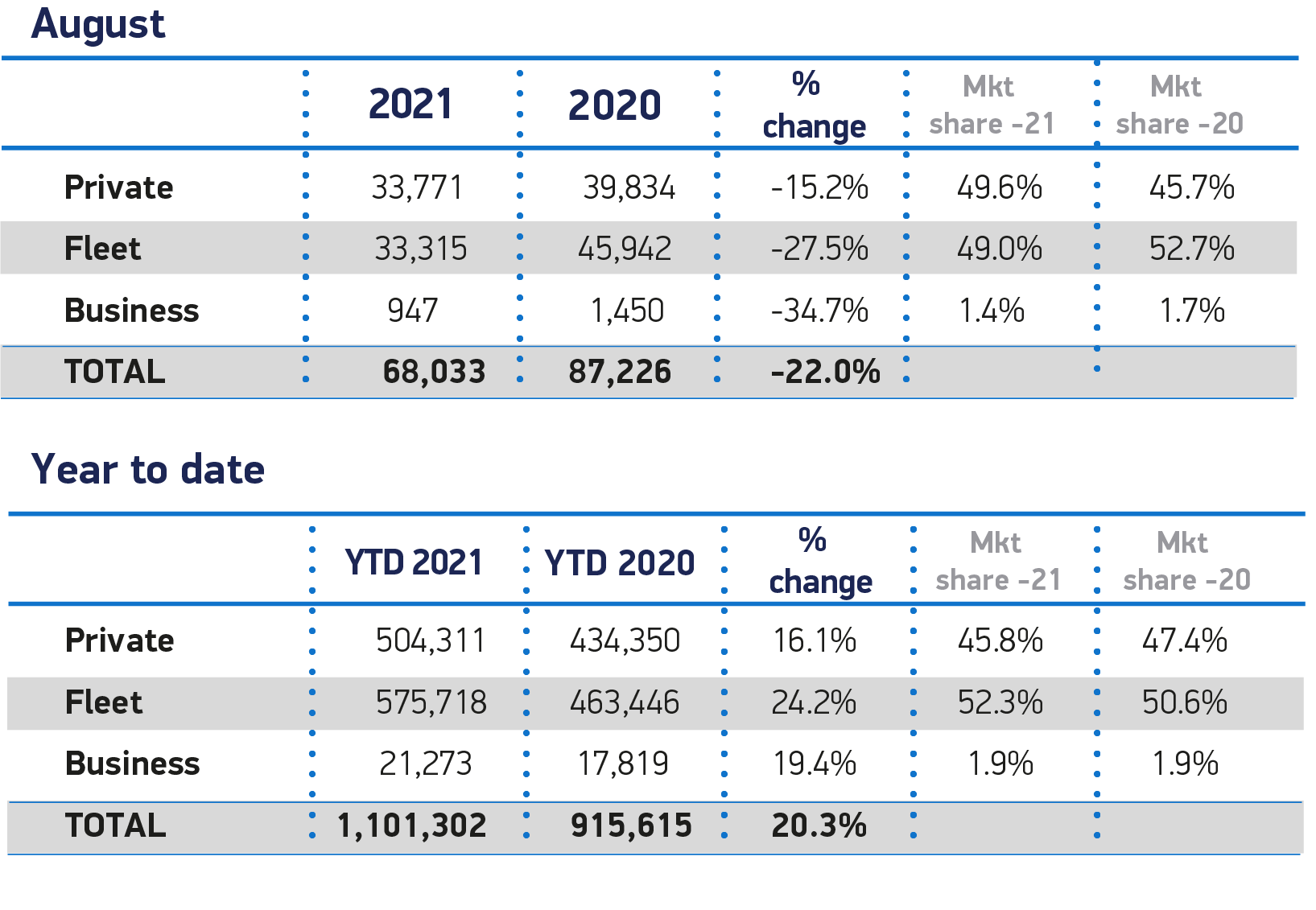 So far this year, UK new car registrations remain up 20.3%, to 1,101,302 registrations, an increase of 185,687 units with BEVs and PHEVs at 8.4% and 6.6% market share respectively. However, this performance is measured against the Covid-hit 2020 market, when showrooms were closed for much of the year. Total registrations in 2021 are -25.3% below the 10 year average for the period January – August, illustrating the ongoing and wide ranging impact of the pandemic on automotive retail.3 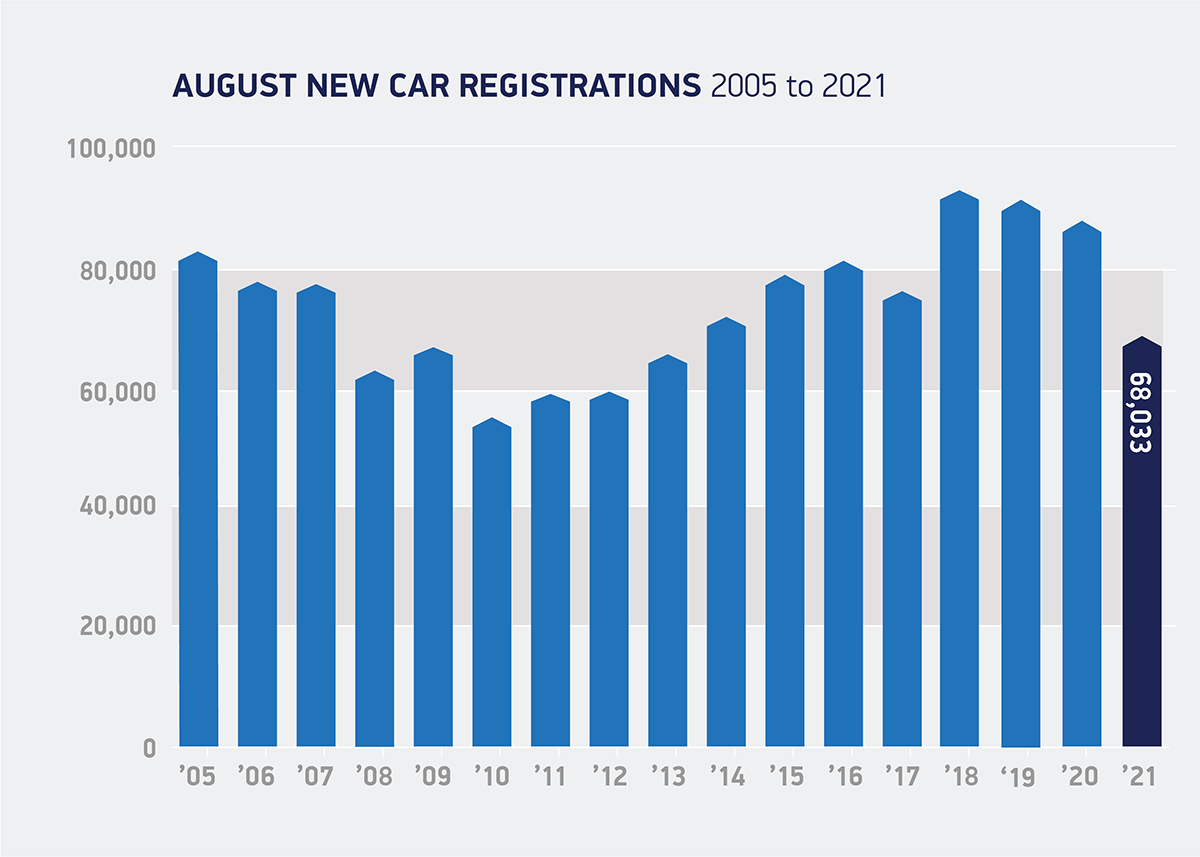 While August is normally one of the quietest months for UK new car registrations these figures are still disappointing, albeit not wholly surprising. The global shortage of semiconductors has affected UK, and indeed global, car production volumes so new car registrations will inevitably be undermined. Government can help by continuing the supportive Covid measures in place currently, especially the furlough scheme which has proven invaluable to so many businesses.

As we enter the important September plate-change month with an ever-increasing range of electrified models and attractive deals, buyers in the market for the new 71 plate can be reassured manufacturers are doing all they can to ensure prompt deliveries.

End of Citroën C1: Ami and C3 offer an alternative adapted to the new challenges of mobility