UK new car registrations fell by -15.8% to 119,167 units in April, according to the latest figures from the Society of Motor Manufacturers and Traders (SMMT)

UK new car registrations fell by -15.8% to 119,167 units in April, according to the latest figures from the Society of Motor Manufacturers and Traders (SMMT). Despite showrooms being open for the entire month, unlike the previous year which saw lockdown restrictions in place until 12 April, global supply chain shortages, of which semiconductors are the most notable, have continued to constrain the delivery of new vehicles.

April’s decline was driven primarily by a -33.3% decrease in large fleet registrations, with manufacturers continuing to prioritise private consumers given robust demand, which helped this market segment see a modest increase of 4.8%. Smaller business registration volumes fared better, growing by 15.4%. 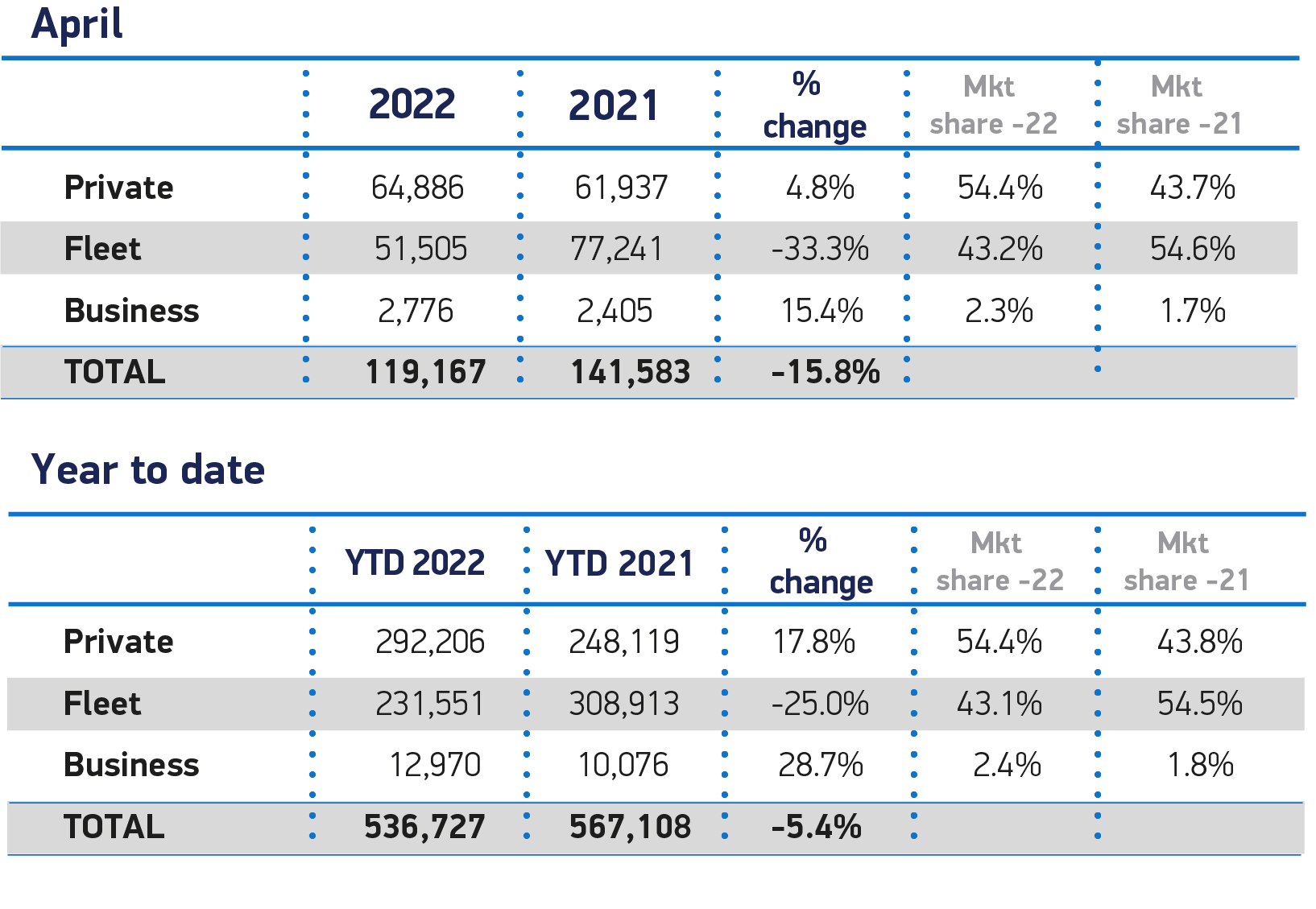 Battery electric vehicles (BEVs) registrations continued to grow with 12,899 of the latest zero emission cars joining UK roads – an increase of 40.9% on the same month last year – and taking a 10.8% market share, up from 6.5% last year. While registrations of hybrids (HEVs) also rose by 18.3%, the number of new plug-in hybrid (PHEV) registrations decreased by a third (-32.8%). As a result, electrified vehicles comprised 27.9% of all new car registrations during April. 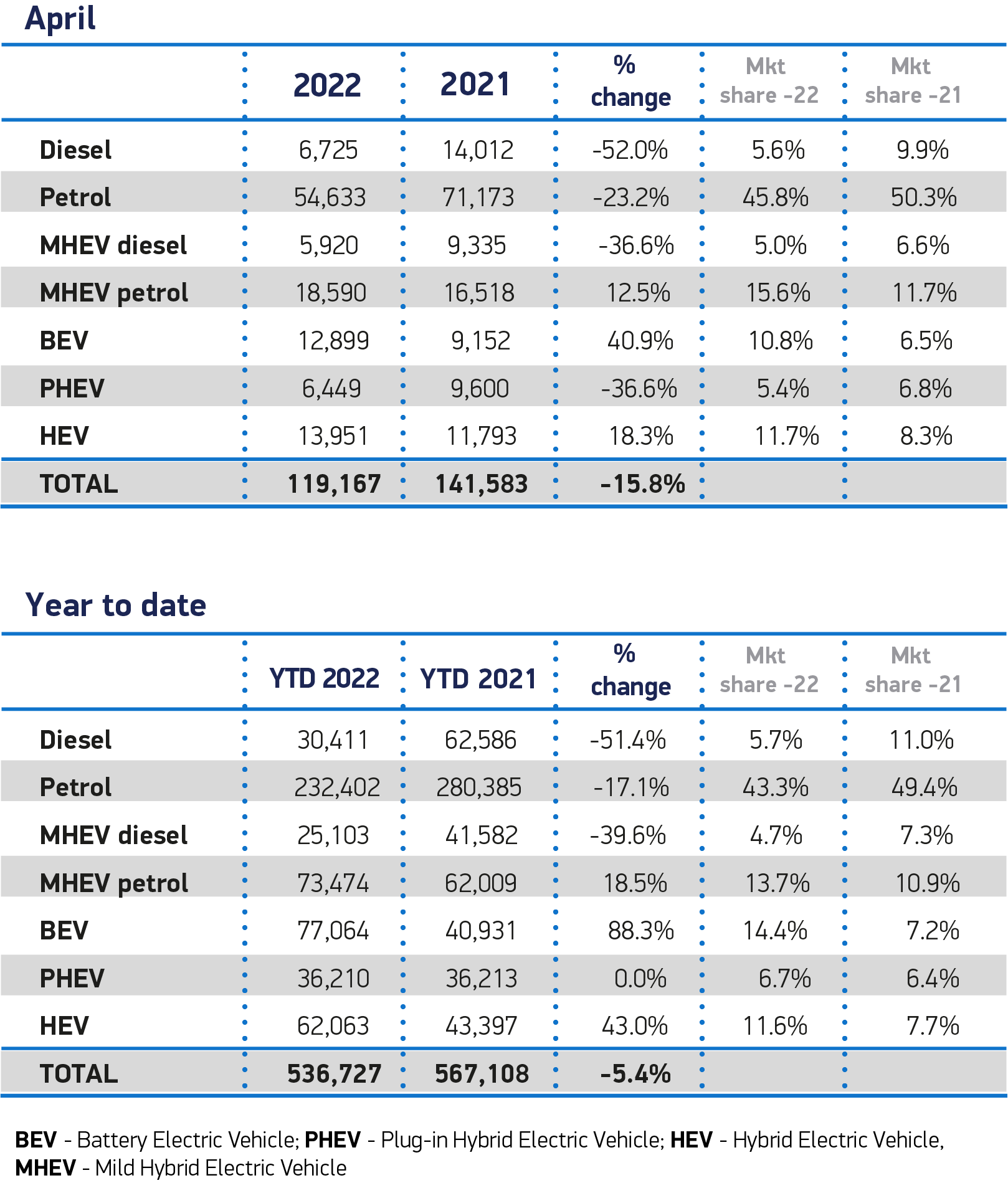 The sector faces further economic headwinds, with rising inflation, not least due to the spiralling energy and fuel costs squeezing household incomes, and further supply chain and other uncertainties arising from the global political situation and the effects of the Russian invasion of Ukraine. More positively, however, drivers able to invest in a new vehicle can still reap benefits, as interest rates remain historically low, grants for BEVs will be in place until at least early 2023, and running costs associated with new electric cars are generally lower than those of petrol or diesel. 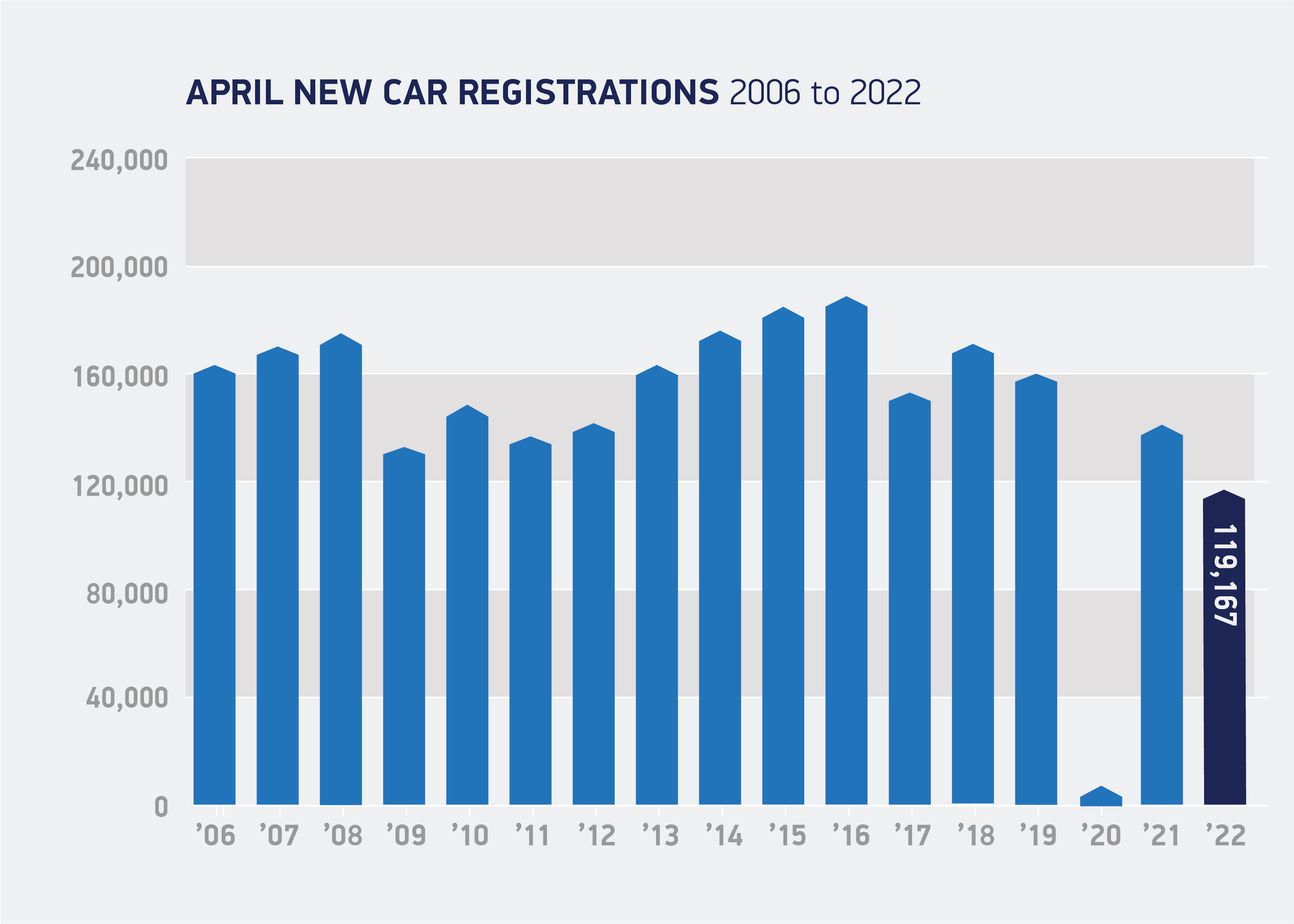 Given the ongoing impact of supply chain constraints and broader macro-economic factors, SMMT has revised its market outlook for 2022, with 1.72 million new cars new cars now expected to be registered during the year, down from the 1.89 million outlook in January.1 While this still represents a 4.5% rise on 2021, it highlights the effect the semiconductor shortage is still having on supply as well as anticipated impacts from rising living costs. The outlook for plug-in vehicles also was downgraded with the forecast for BEV registrations now at 289,000 units, down from 307,000; and PHEVs at 144,000, down from 163,000. HEVs also saw their outlook fall from

198,000 to 193,000. This means that plug-in electric cars are now expected to account for a quarter of all registrations (25.2%) during the year, with BEVs alone comprising around one in six new cars on the road.2

The automotive industry remains supportive of the UK’s Net Zero ambitions, and is committed to ending the sale of petrol and diesel cars and vans by 2035. However, government’s road transport decarbonisation objectives are reliant on a strong market and increasing volumes of electric vehicles being sold each year. Any regulation designed to accelerate this market shift must be simple, pragmatic and reflect the diversity of the UK automotive industry and the need to encourage customers to make the switch. The biggest obstacle cited by customers to this transition is concerns over charging infrastructure, so any regulation seeking to increase electric vehicle sales must be matched by commensurate and binding targets on charging infrastructure provision.

The worldwide semiconductor shortage continues to drag down the market, with global geopolitical issues threatening to undermine both supply and demand in the coming months. Manufacturers are doing everything they can to deliver the latest low and zero emission vehicles, and those considering purchase should look to place their orders now to benefit from incentives, low interest rates and reduced running costs. Accelerating the transformation of the new car market and the carbon savings demanded of road transport in such difficult times requires not just the resolution of supply issues, however, but a broader package of measures that encourages customer demand and addresses obstacles, the biggest of which remains charging anxiety.