Czech car manufacturer to offer European models as early as 2023

ŠKODA AUTO continues to advance the company’s internationalisation and is on the cusp of entering the Vietnamese market. In cooperation with its local partner, the Thanh Cong Motor Vietnam (TC Motor) the Czech carmaker will be offering the first European models in the country as early as 2023. The assembly of CKD (Completely Knocked Down) kits of the KUSHAQ and SLAVIA models will start in 2024. The production line is currently under construction. With its dynamically growing economy and significant potential on the automotive market, the country presents the ideal conditions to further strengthen ŠKODA AUTO’s position in the region. The company anticipates an initial sales volume of 30,000 vehicles per year.

“For ŠKODA AUTO, entering the Vietnamese market is the next logical step in our internationalisation strategy. Our attractive model portfolio offers exactly the right products for our customers, and we will be able to play to our strengths in this highly dynamic market. In addition, the geographical proximity to India provides great synergy effects; as early as 2024, we will be exporting vehicle kits from our Indian plant in Pune to Vietnam, marking a major advancement of our INDIA 2.0 project. Ultimately, this will significantly strengthen our presence in Southeast Asia.”

“Internationalising our business is an integral part of our NEXT LEVEL – ŠKODA STRATEGY 2030. We see considerable growth potential in Vietnam, and the Czech presidency of the EU Council and the EVFTA free trade agreement create very favourable economic policy conditions. We have also found a strong and reliable partner in the TC Motor to quickly gain a foothold in Vietnam. We are convinced that our model portfolio perfectly reflects the wishes of the Vietnamese people, and we are looking forward to launching early next year.”

Martin Jahn, ŠKODA AUTO Board Member for Sales and Marketing 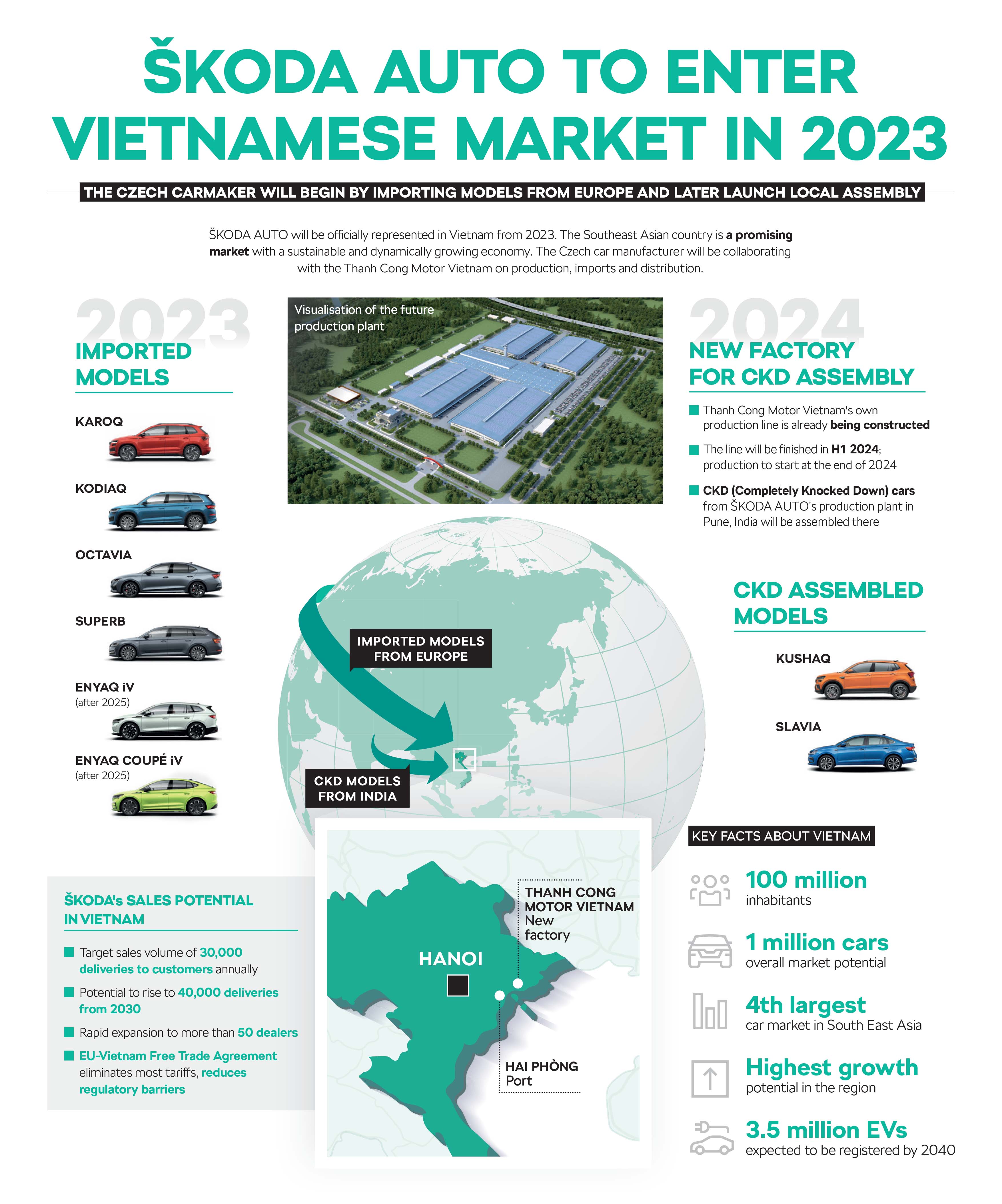 Initially, the KODIAQ, KAROQ, SUPERB and OCTAVIA model series will successively be imported from Europe, starting in 2023. As ŠKODA AUTO’s local partner in the Vietnamese market, the TC Motor will take over the local production and distribution of the vehicles. With over 20 years of experience in vehicle manufacturing and sales on a contract basis, the Hanoi-based group is also investing in the acquisition and development of industrial sites, such as the Viet Hung Industrial Park. In the future, ŠKODA models will be rolling off the production line at the site in Quang Ninh province.

CKD production of KUSHAQ and SLAVIA as early as 2024, ENYAQ iV family available after 2025

The construction of a TC Motor-owned production line is already underway and should be completed in the first half of 2024. Assembly of the made-in-India KUSHAQ and SLAVIA model series from CKD format will then begin in 2024. The KUSHAQ will be available to order in the first half of 2024, and orders for the SLAVIA can be placed from the fourth quarter of 2024. A 16,000-square-metre plant is being built in Pune to manufacture the respective subassemblies. The all-electric ENYAQ iV family models will round off the local portfolio in Vietnam after 2025.

Exporting vehicles from India is the next step in the INDIA 2.0 project

By exporting vehicles from India, ŠKODA AUTO is pressing ahead with the implementation of the INDIA 2.0 project and emphasising India’s strategic importance in the automaker’s development. Exports of the first left-hand drive ŠKODA KUSHAQ to the Gulf States began recently. ŠKODA AUTO has led the Volkswagen Group’s activities on the Indian market since 2019. The Group’s investments to date amount to one billion euros, of which 250 million euros have been allocated to research and development. In the long term, ŠKODA aims to achieve a market share of five percent alongside the Volkswagen brand, depending on market and segment developments.

The vehicles will be distributed through a regional dealer network of local partners. The first dealerships are planned in Hanoi and Ho Chi Minh City – taken together, these two cities record the vast majority of new car sales in Vietnam. Subsequently, ŠKODA AUTO expects to quickly expand the dealer network to include more than 50 partners. ŠKODA AUTO projects an annual sales potential of 30,000 units initially and over 40,000 units annually from 2030, thanks in part to interest in volume models based on the MQB-A0-Global platform and rising demand for electric vehicles in the country’s major cities.

Entering Vietnam is also worthwhile due to the particularly dynamic growth of the region’s car market; despite having a population of around 100 million people and currently only around 34 vehicles per 1,000 inhabitants, the country is already the fourth strongest automotive market in Southeast Asia. At the same time, European brands are likely to become increasingly prominent in Vietnam due to the gradual elimination of customs duties on goods from the EU by 2030. For this reason, ŠKODA AUTO expects the total annual market volume to increase to around one million vehicles beyond 2030.