The automotive industry is rapidly reinventing itself in light of the digital revolution. Traditional manufacturers are looking to harness the power of artificial intelligence (AI), connectivity and data analysis to optimise their production facilities. So far, many of these innovations have remained stuck in the lab or pilot phase, but momentum is building. By the end of the decade, these new approaches could create a step change in production efficiency and sustainability.

Nanotronics specialises in artificial intelligence process control (AIPC), an alternative to the traditional statistical process control (SPC) approach. The New York-based company has developed a platform that combines AI, automation and computer imaging to anticipate problems in the manufacturing process and implement a solution. The system harnesses data from a factory’s various workstations, detecting when something anomalous crops up—anything that would result in a flaw in the finished product. It then comes up with rapid corrective action to ensure the final product can still be optimised at the end of the process.

“We are using data that the factories are already gathering, and running it through a simulation,” says Matthew Putman, Nanotronics Chief Executive. Initially, the system may just alert a human employee to where an issue will occur and leave him or her to take action. As trust grows, the operator may increase the autonomy of the system and let it take corrective action on its own.

The factory of the future is much smaller. It doesn’t have to be a molecularly precise building the size of a car, but it should be much smaller and involve tighter supply chains

It is still early days for Nanotronics but already its software and instrumentation have been implemented in 126 companies. Significant benefits can be realised quickly, with some companies improving their yields by 20% within a week. “It makes a big difference,” Putman tells Automotive World. Within the automotive sector it is used by a number of suppliers, including those providing tyres, wiper blades, hoses, belts, display screens, power inverters, batteries and LiDAR.

Data is also being harnessed to facilitate and expand upon the principles of lean manufacturing. Fero Labs addresses not so much the gathering of data but the interpretation of it into actionable insights. “Our initial plan was to add sensors in factories and increase the quantity of data,” explains Berk Birand, Chief Executive. “However, we realised that many production sites, particularly the larger ones, already have a lot of data available in them. The main challenge they are facing is making sense of the data.”

Fero uses explainable machine learning, also known as Bayesian machine learning, to help companies pinpoint areas for improvement. While most automakers and Tier 1s use Fero to load the data that they already have from existing sensors, they can also use the tech to help decide where to place new ones. A paint shop offers a useful example. Paint shops use chemical-driven processes, and data can be collected on the base coats, the paints, the temperatures, the humidity and the robots carrying out the painting.

“Our software can detect that during stage three of the base coat, temperature has a massive impact on prediction accuracy, showing that the models are pointing in that direction,” says Birand. “Engineers may then decide to add particular sensors or some more datapoints to that part.” 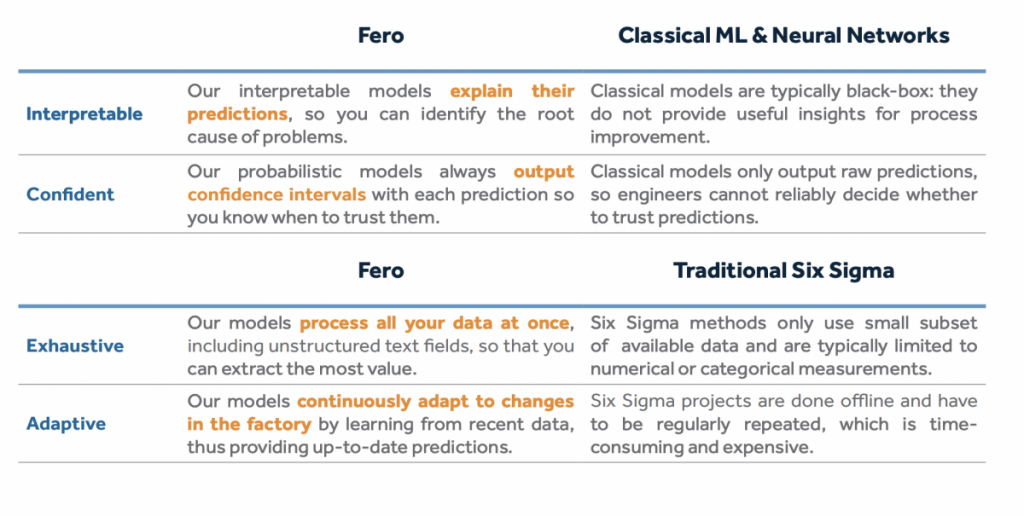 Volvo Trucks uses Fero technology within the paint plant of its Virginia factory in the US, where it helps to minimise the site’s paint waste, to forecast specific colours that will be needed and to predict specific amounts of each colour so only the amount of paint to be used is made.

At its heart is explainable machine learning, a subset of machine learning that allows engineers to better understand what the model has learnt. Machine learning is a broad way of applying advanced statistics in the industrial setting, but not all machine learning is created equal. With some methods, the system is fed data and then produces a prediction or recommendation. The trouble with these systems is that engineers do not have insight into the model’s thinking, and why it makes the conclusions it does. When something goes wrong, there is no explanation. “Engineers don’t like dealing with black boxes,” he states. “They want to understand why certain predictions are being made.” Fero’s approach, he states, makes that possible.

The secret weapon against shortages

LeanDNA is another company supporting factory optimisation but from a slightly different position: inventory management. The company offers cloud-based predictive analytics for procurement teams, a tool that it bills as a manufacturer’s ‘secret weapon’ against shortages and excess inventory. Parts shortages, specifically of semiconductors, have put a serious damper on the automotive manufacturing sector throughout 2021. AlixPartners estimates that automakers will lose 3.9 million vehicles from production to the chip shortage this year. The bite out of sales will be substantial at an estimated US$110bn. What if companies had the data to better manage such a crisis?

“It’s all about the visibility of data,” says LeanDNA’s Chief Executive Richard Lebovitz. “We do a lot of work around shortage analytics and understanding where the shortages are and how to prioritise those.”

The idea is that once you have a prioritised sequence in place and synchronised data, the recovery from a shortage will be much quicker. The key is to prioritise what is needed and communicating that to suppliers. A Priority One shortage means a certain part will affect an order, versus a Priority Three shortage which will affect something forecasted that may or may not materialise. “Most companies don’t think that way,” he says. “They are struggling just to know today’s shortages are or what might be coming up.”

From minimising the impact of key part shortages to optimising the paint used in a track plant, these approaches are contributing to a more efficient approach to vehicle production. Many of them have only begun to find footing in automotive applications, but as they mature and uptake expands, they could lead to a radically different factory of the future.

For Lebovitz, the holy grail of manufacturing is a well-understood and well-balanced production process that can respond rapidly to any change. Others take a much more extreme view of the coming evolution. For Nanotronics’ Putman, it leads to a car factory that itself is no bigger than a car. “The factory of the future is much smaller. It doesn’t have to be a molecularly precise building the size of a car, but it should be much smaller and involve tighter supply chains,” he forecasts. That means Brooklyn, where Nanotronics is based, could be turning out cars one day. The focus is local, building locally and employing local people, and made possible by AI. “The more you use central AI-driven local systems, the tighter your supply chain, the more you can optimise the final product and not be reliant on others. With that in mind, I think that the future is a car factory in your neighbourhood.“

For Birand, the factory of the future is an intelligent one that completely eliminates waste, taking in only those resources as it must use, whether that applies to quantities of paint or various forms of energy. To fully optimise, though, the wider supply chain becomes one big network: “Think of it like an organism with hundreds of plants working together. Plants upstream and downstream are all optimised for a particular order so as to increase quality and reduce waste.” While this could be realised in the near term for some sectors, such as chemicals, automotive may take longer due to the types of processes involved, like stamping. These are more difficult to instrument and measure, but he sees promising signs from plants like Volvo Trucks in Virginia.